Case Study 3: Use of scientific methods to investigate the azulejos of the Capela de São Roque in Lisbon

Azulejos are hand crafted tin glazed tileworks found across Portugal and Spain. In Portugal, these tiles are a major cultural trait, originating from the 16th C to the present day and frequently depict scenes, including historical events of note.  The azulejos of the São Roque (Saint Roch) Chapel, in the church dedicated to the same saint in Lisbon, are justly considered one of the major majolica works made anywhere during the last quarter of the 16th century. This earliest known surviving ensemble of Portuguese manufacture signed and dated “Francisco de Matos : 1584”  has long puzzled art historians mostly because it seems to be a quite unique case in Portugal. An investigation performed by LNEC, the Museu Nacional do Azulejo, the Museu de São Roque, Lisbon, Portugal and Laboratório HERCULES – Universidade de Évora, Portugal used various scientific techniques to make some illuminating discoveries. 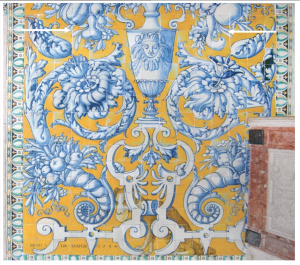 The azulejos consist of four panels. Two of these face each other, the “panel of the dog” and the “panel of the pilgrim”. Above the panel of the pilgrim is situated the “panel of the cardinal” and the fourth “panel of the putti” is to the right over a door (see image below). In 1913, only the two lower panels were visible and at the insistence of José Queiroz, a noted artist and historian of Portuguese ceramics, a large painting was removed to reveal the upper panels. Unfortunately, mountings needed to support the heavy painting had caused damage to the upper panels and a restoration of all the panels was entrusted to António Luis de Jesus, an aged third-generation master painter much praised by Queiroz who also states that all fragments of the cut and perforated tiles that could be saved were reapplied by the restorer, but yet 47 reproduction tiles had to be made plus a number of fragments and that, although the blue and violet were satisfactorily reproduced, the yellow and green did not match the original tiles.

The church, Igreja de São Roque, contains many fine examples of azulejos, as well as the matchless Chapel of St. John the Baptist made in Italy in the 1740s, and can be viewed on Google Maps (3D interior) and the panels that feature in this Case Study are to be found here. 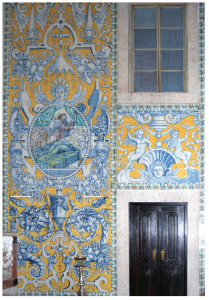 Some observations about the panels

On close inspection, there are some significant observations that can be made about the panels. The panels of the dog and pilgrim are similar in appearance regarding colour and style. However, the other two, more recently uncovered panels, both have darker yellow colour in the background and the motifs are painted in a softer manner in a less concentrated shade of blue. Differences in the background shades within the same panel appear to be the result of the brush strokes rather than the pigment when looked at more closely. The close observation of the panel of the dog also reveals technical issues during production including staining of some tiles, possibly caused by contamination by copper pigment for being fired in the same kiln as green-glazed pottery, and running of some dark outlines, showing that many, if not all, azulejos were fired in an upright position, also attested by the agglomeration of glaze often seen along one edge. The panel of the pilgrim only shows a slight greenish staining of some tiles and those problems are seemingly absent from the other panels.

Research questions arising from the observations

The question that inevitably comes to mind is that if the panel of the dog (and presumably the panel of the pilgrim) were painted in 1584 and the other two panels (cardinal and putti) are different and were only brought to light in 1913, when were they painted? Do they even date from the 16th century? Or are they a much more recent addition to the original lining? The research aimed to clarify these important questions as well as determine technical characteristics that might establish an eventual affiliation with other productions already known through the instrumental observation and analysis of samples from the panels of the dog, cardinal and putti.

A total of fourteen samples were carefully collected with a scalpel from spots where the glaze was already detaching or from edges of incomplete tiles, including the panel of the dog, the panel of the cardinal, the panel of the putti and the pattern tiles that frame the panels. These were prepared for analysis using a scanning electron microscopy coupled with an X-ray energy-dispersive spectrometer (SEM-EDS). Optical images of cross sections were obtained with a Leica DFC295 digital camera coupled to a Leica M205C stereomicroscope. The SEM-EDS observations and analyses were made at the HERCULES Laboratory in Évora. The pigmented glaze was analysed in situ, over the face of the tiles, by energy-dispersive X-ray fluorescence (ED-XRF) with a hand-held Bruker Tracer III spectrometer at 40 kV and 30 μA over 180 s acquisition times. The spectra were interpreted with the ARTAX software and principal component analysis (PCA) was performed on the EDS results.

The analysis looked at various aspects of the tiles:

The morphologies of the samples were very similar, indicating that the panels were the work of a single workshop. Likewise, no significant differences were detected between the glazes from each of the panels. It was possible to identify the tiles which had been used for the later restoration, however, as the clays used for these contained higher levels of calcium and magnesium. The ED-XRF spectra of the colours in the glaze matrices are also very similar which also suggests that all the panels were produced within a limited period. The same or similar batches of pigments were used for the panel of the pilgrim and the later uncovered panel of the cardinal directly above. Consequently, the conclusion is that the panels are the same in origin and were manufactured within a short time span.

This Case Study illustrates how scientific methods can be used to discover detailed information using  small samples without causing any noticeable damage to the objects under investigation. Only samples which were already coming away from the panels were used to avoid any further damage. Furthermore, by publishing the results and disseminating them to the wider scientific community, other researchers are able to access and reuse this data and analyses to make comparisons and help identify the provenances and production periods of similar azulejos. These are all best practices which will be promoted by 4CH.

The paper contains a far more detailed description of the investigation and analysis and can be downloaded here.

Other papers on Portuguese 16th century majolica tiles by the same research group may be downloaded from here:   Studies in Heritage Glazed Ceramics (lnec.pt)