Case Study 1: Using 3D Reconstruction and story-telling to bring the past to life

Ename, a small, local heritage site and museum in north west Belgium with some notable artefacts has used 3D technologies to reconstruct its Abbey as it evolved over several centuries.  By using story-telling to create first-person interaction with important objects and books belonging to the Abbey, the museum has created an engaging experience for visitors. Children can learn through a VR game and one of the key artefacts has been printed as a 3D item for the educational department.

Visual Dimension, partner of 4CH project,  is a Belgium-based SME active in architecture and digital cultural heritage, focusing on three domains: virtual 3D reconstruction, VR storytelling and interaction with 3D digital heritage. The company specialises in the interpretation and virtual reconstruction of historical sites, landscapes and objects and in digital restoration and virtual re-contextualisation of museum objects through interactive storytelling.

A major project has been Ename Abbey which was founded in 1063 by Benedictine monks and survived until the 18th century and which has a fascinating history… Over the years, the site grew and as well as the archaeological evidence of the changes to the building, several artefacts also are preserved in archives including two rare books – an educational book and a medieval rent book.

The project started with a 3D reconstruction of Ename Abbey as it would have appeared in 1065 when it was a small, rural settlement adjacent to the remains of a failed trade settlement, constructed within the ox-bow of a river. Between 1150 and 1200, the Abbey grew significantly – a new church was built and other buildings were renovated. Over the next century a hospital and an infirmary (for the monks) was added and the Abbey dominated the landscape, owning a large number of properties. Disaster struck in 1578 when Protestant troops plundered the Abbey during the occupation of Oudenaarde. The monks fled, only returning in 1596 to start rebuilding the Abbey. During the 17th and 18th century, the Abbey prospered with further additions such as a carillon tower and a French garden with fountains and an orangery, until 1795 when the French Revolution resulted in the dissolution of the Abbey.

How the Project was conceived and executed

Visual Dimension were originally commissioned to create a 3D reconstruction of the Abbey and the village as it had looked at various times during its development. The 3D Timeline that was created shows in the museum and on the archaeological site the changes to the site over the time period 1015 to 1795. 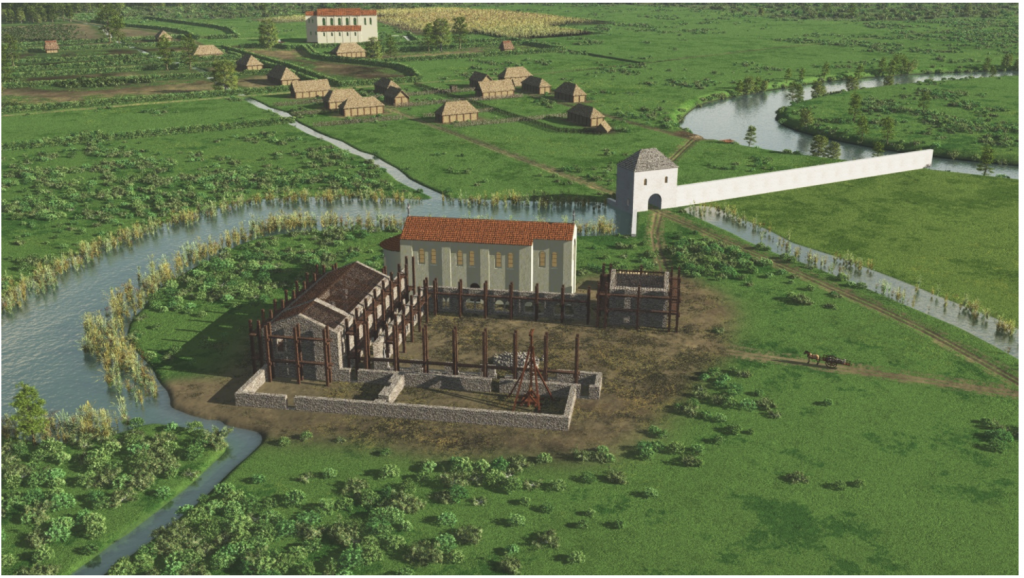 Reconstruction of Ename Abbey in 1065 as seen from the south. Visual Dimension bvba, CC BY-NC-SA 4.0

For two periods (1290 and 1665), these reconstructions were turned into 3D virtual worlds that can be explored interactively like a video game, and contain many interiors and objects, including objects that currently are in museums and archives, but also characters and animals. Most spaces of the medieval Abbey such as for example the Scriptorium, where books are made and written by the monks, were also recreated. In 17th century Ename, interiors of village houses and all related everyday objects were reconstructed. The entrance building of the abbey contains a complete pharmacy and doctor’s consultation room, and the abbey tower has a clock and 35 bell carillon, which is played automatically by a large drum mechanism or manually by a virtual monk.

The results of the project 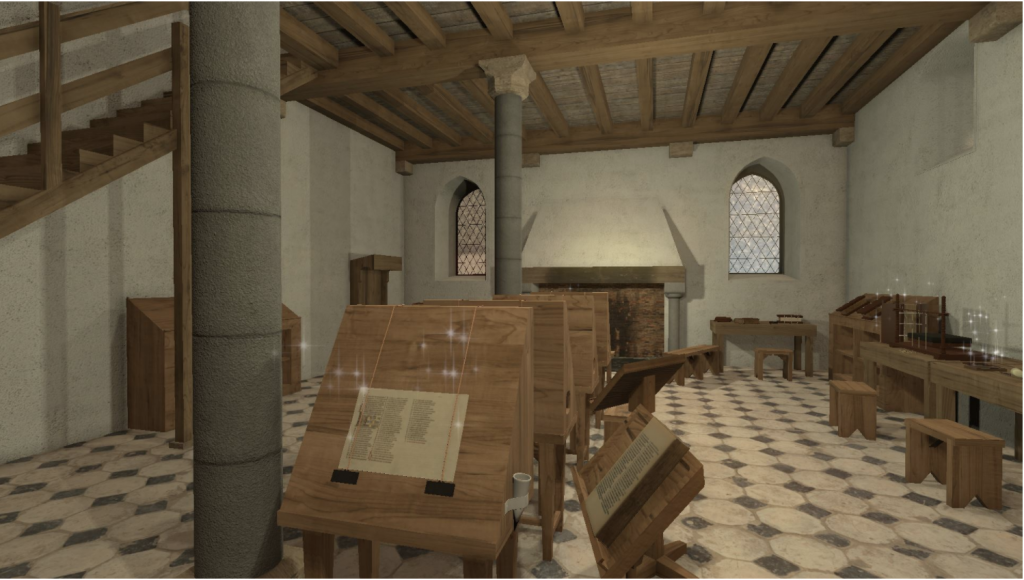 The scriptorium of the Ename Abbey in 1290. Visual Dimension bvba, CC BY-NC-SA 4.0

What is particular about the image is that it not only shows the virtual reconstruction of the medieval scriptorium of the Ename Abbey, based upon the archaeology and its current interpretation, but also provides a “visual story” about medieval book making (all stages of the process are visible) and gives access to two Flemish Masterpieces through a non-contact VR interface (Timegate) or a games controller. This interactive storytelling is both used by guides and museum visitors.  Guides can give a virtual tour through the medieval abbey and village and tell their own story based upon the parts of the reconstruction that they show. Museum visitors can explore the virtual village and abbey and get small, interconnected stories each time they pick up an object.  Guides with school groups can use the application also as a game where you land with your Time machine in Ename during Pentecost 1291 to visit the abbot, but things go awfully wrong and you have to start a quest and find lost keys to come to a happy end (you can also end up at the pillory, being chased by fierce goose or drown in the river). While using the 3D application in one way or the other, you always learn about the medieval society.

For example, one Masterpiece is an educational book, of which one page is being written on the writing desk. It is written in the Ename Abbey in medieval Dutch, which easily can be read from the page, and the translation in modern Dutch can be heard when pointing at paragraphs of the text. The nice thing is that the author (a monk in the abbey) spells out his own name twice, and confesses that it took him quite an effort to write it (the full book is written in rhyme, both Dutch and Latin). 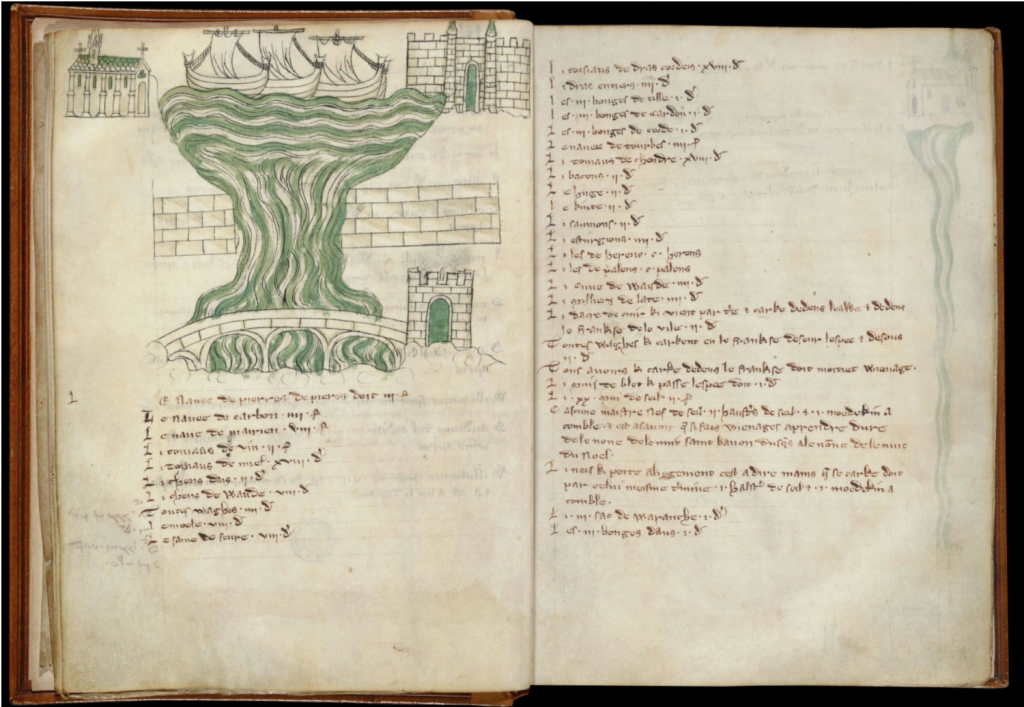 The second Masterpiece is an outstanding medieval rent book (Veil Rentier), documenting the properties of the lord of Oudenaarde (just next to Ename), written in 1275.  It is on the writing table to make some additions and corrections. Reading this book teaches you a lot first-hand about the medieval society, how a harbour functions, how politics gets involved when there is a bill to be paid, or the many taxes that were applied. The book contains nearly 400 drawings that show not only daily life of the 13th century but are also quite unique such as one of the oldest known depictions of a windmill.. On these pages, is explained how the harbour works and which taxes are applied. Digitisation enables everyone to have access whilst the original can be conserved in the Royal Library in Brussels. Find more about the Rent Book. 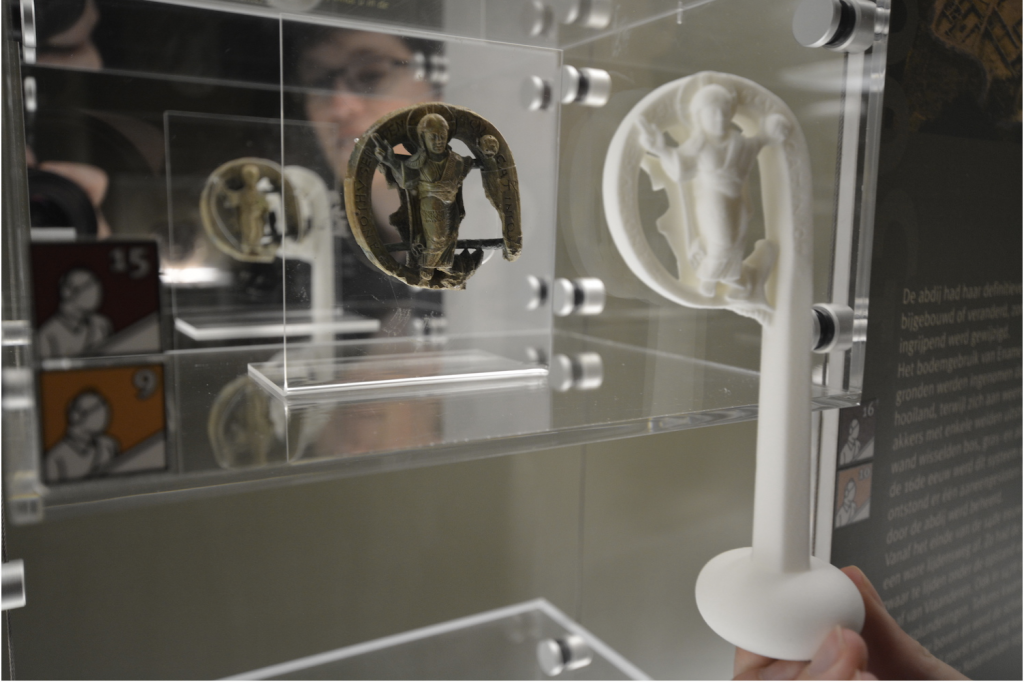 The VR application, as available in the Ename museum, can be used as a virtual tour or as a game (for children 10-12 years).

The game is about another Flemish Masterpiece, an ivory crosier on display in the Ename museum, which has been restored digitally to be used in the game but has also been 3D printed (used as object in the educational programme) as shown.

By using a combination of 3D model reconstructions, Virtual Reality and story-telling to create engaging content, the Ename Abbey and museum is able to fully exploit its cultural heritage.  Artefacts such as the Rent Book (the original is held by the Royal Library in Brussels) can be made accessible to all as a 3D interactive object in its original context – without fear of damage! Virtual Reality tours and games educate and inform the visitors, adults and children alike. The reconstructions, 3D models of objects and digitized documents also are documented in a blog for historians and archaeologists to provide the reconstruction rationale in an accessible and long-term way.